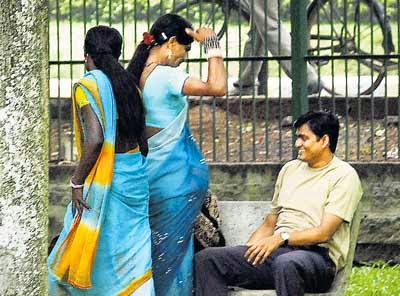 Through this blog post, I want to draw the attention of civic authorities and police department in Hyderabad and particularly Cyberabad, about the rising menace of eunuchs and to what extent it has escalated.

To start with, these eunuchs are not the ones who are biologically different from others. These eunuchs are actually males who dress like female and cover their face with horribly bad make up. They mostly roam in a group of three, four or more, during peak office hours near Cyber Towers and Hitech City flyover in Hyderabad.

Their main target is office goers, school students and vulnerable women who cross this busy junction everyday with a purpose.

Earlier, these eunuchs used to request people to donate some money at will, but now they have gained enough confidence with the city police department doing nothing to stop their wicked act. Surprisingly, now they have literally started robbing easy victims on broad daylight.

For instance, one day these eunuchs targeted a young IT professional who just alighted from an auto near this crossing. When they saw the man was unwilling to spare some money, they snatched his mobile phone from his pocket and only gave it back, when he handed a 100 rupee note to them.

On another day, this group targeted a young couple. When the boy didn’t want to entertain them, tried to walk away, one of the eunuch pulled the girl’s hand bag. Being scared the girl started screaming. The boy in a desperate situation gave some money to the eunuch and then the girl got back her bag.

These eunuchs are abusive as well. A woman one day refused to hand over some money to them. Being rejected, three-four eunuchs started hurling abuses at her and making obscene gestures, which is definitely a criminal offence.

These eunuchs being verbally abusive and at times physically attacking people, very few manage to garner the courage to counter them. But, the question is… why these ordinary people who are on streets for a specific purpose should risk their lives to deal with such miscreants. Isn’t it the job of police department to handle these eunuchs strongly and teach them a lesson?

As long as the traffic constables have their coffer filling they really care...